Head down to Mexico Today to join the thousands of on-lookers and fans to support your team or to just get away for a long weekend. And don’t forget to get your free quote or buy auto insurance to Mexico on Mexinsur.com!

“The SCORE Baja 1000 is a Mexican off-road motorsport race held on the Baja California Peninsula.[1] The race was founded by Ed Pearlman in 1967 and is sanctioned by the SCORE International.[2] The race is one of the most prestigious off road races in the world, attracting competitors not only from every state in the United States, but also has attracted racers from Argentina, Australia, Bahamas, Brazil, Belgium, Canada, England, Finland, France, Germany, Guam, Guatemala, Holland, Israel, Italy, Japan, New Caledonia, New Zealand, Russia, Saudi Arabia, South Africa, Spain, Sweden, Switzerland, Uruguay, Yugoslavia as well as the host country of Mexico.[1] The race is the final round of a four-race annual series, including the SCORE Desert Challenge, the SCORE San Felipe 250 and the SCORE Baja 500. The 2017 Baja 1000 marked the 50th anniversary of the race.[3].

The Baja 1000 allows various types of vehicle classes to compete on the same course with classes for; cars, trucks, motorcycles, ATVs and buggies.[1] The course has remained relatively the same over the years, about every other event being either a point-to-point race from Ensenada to La Paz, or a loop race starting and finishing in Ensenada. The name of the event can be misleading as the mileage varies for the type of event (“Loop” of 600 to 850 miles starting and finishing in Ensenada, or “Point to Point” also known as the 900.”
( per WikiPedia – https://en.wikipedia.org/wiki/Baja_1000 ) 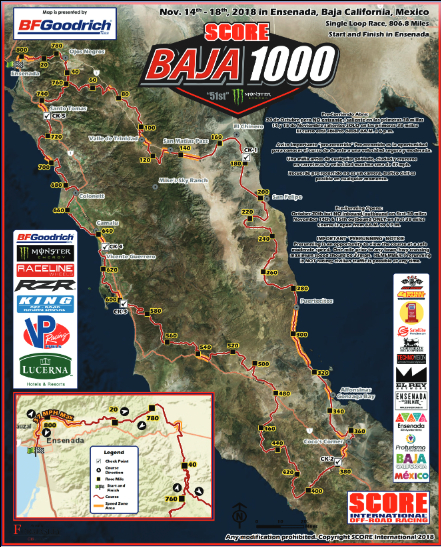 “Each year there are reports of spectators sabotaging or booby-trapping the course by digging holes, blocking river flow, or burying and hiding obstacles. Racers are warned to beware of large crowds of spectators in remote parts of the course since it may indicate hidden traps or obstacle changes. Many of the booby traps are not created to intentionally injure the contestants but are created by the local spectators as jumps or obstacles for spectator entertainment and intriguing moments to be caught on videotape. The haphazardly designed jumps, created by the spectators, are very dangerous as the contestants may inadvertently enter the booby-trap at unsafe speeds, resulting in damage to the vehicles or injuries to competitors or spectators. Awareness of booby traps and course alterations are often part of race-day strategy and convey an advantage to the best prepared teams – nonetheless given the danger the traps pose, it is customary for competitors to quickly communicate course hazards to other competitors through on-board radio communications and radio relay.”
( per WikiPedia – https://en.wikipedia.org/wiki/Baja_1000 )

And don’t forget to get your free quote or buy auto insurance to Mexico on Mexinsur.com!